Literature / A Pocket Full of Rye 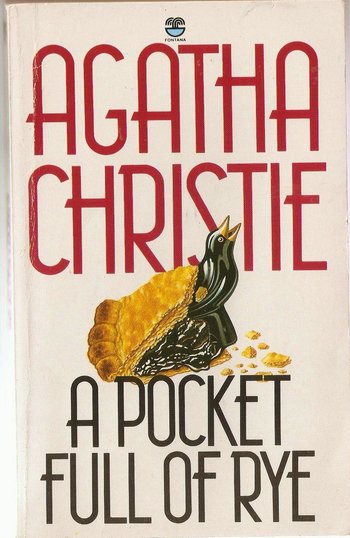 A Pocket Full of Rye is a work of detective fiction by Agatha Christie, published in 1953.

Businessman and all-around Jerkass Rex Fortescue takes a sip of tea in his London office and promptly dies. When he is discovered to have been poisoned by taxine, which takes a few hours, suspicion shifts from the office workers to his household, where he had breakfast. That household includes Rex's Gold Digger Trophy Wife Adele, his wimpy but dutiful son Percival, Percival's unhappy wife Jennifer, and Rex's daughter Elaine, who is the only one that cares that Rex is dead. Domestic staff includes Gladys Martin, the dimwitted parlor maid, and Mary Dove, the housemaid who seems to know more than she's telling. The household grows when, very soon after the murder, Rex's Black Sheep younger son Lance returns from a long sojourn in Africa.

It's an Agatha Christie novel so there's Never One Murder. Poor Gladys Martin is found strangled in the backyard, which draws the attention of Miss Jane Marple, who knew Gladys. Miss Marple finagles her way into an invitation to the Fortescues' household to ensure justice is done. It's Miss Marple who realizes that the murders were done in the pattern of the nursery rhyme, "Sing a song of sixpence

The book was made into a Russian film, Tayna chyornykh drozdov ("The Secret of the Blackbirds"), in 1983, and has been adapted twice for television, first as a two-part episode of BBC's Miss Marple series in 1985, starring Joan Hickson in the title role; then on ITV's Marple starring Julia McKenzie in 2009.