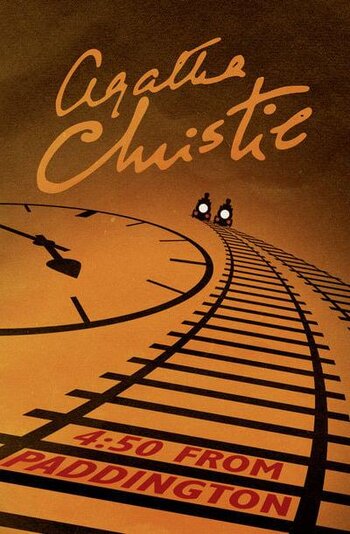 4:50 from Paddington (originally published in the United States as What Mrs. McGillicudy Saw!) is a 1957 novel by Agatha Christie.

Elspeth McGillicuddy is coming back from London, having done some Christmas shopping. While riding along in her first-class cabin, she happens to look over at a train on the next track, which is matching her train for speed. She is horrified to witness a man strangling a woman to death. No one will believe her, not the ticket taker she first tells, nor the police that she alerts. After all, no one found a body. So after she returns home to her village of St. Mary Mead, she tells a real expert on murder: Miss Jane Marple.

Miss Marple, unlike all the clueless men in law enforcement, takes her friend very seriously. She goes over the route and, given what Mrs. McGillicuddy told her, deduces that the murder must have taken place on a section of track near an estate called Rutherford Hall, where the killer would have had the chance to toss the body out of the window and down a steep embankment.

So she investigates. Miss Marple recruits one Lucy Eyelesbarrow, a sort of deluxe cook and domestic servant, and gets her a position at Rutherford Hall where she can act as Miss Marple's eyes and ears. Lucy finds an unconventional household at Rutherford Hall. There's Luther Crackenthorpe, the patriarch, a bitter old man who refuses to share any of his vast fortune with his children, and hopes to outlive them. There's Emma, Luther's maiden daughter who is stuck being his caretaker. Luther's sons are Alfred (petty criminal), Harold (affects the manner of an upper-class businessman, but is actually staring at financial ruin), and Cedric (the "black sheep" bohemian painter). Finally there's former RAF pilot Bryan Eastley, widower to Luther's late daughter Edith.

Lucy finds something else. Namely, she finds a body, hidden in a storage shed, the corpse of the woman strangled on the train. Who is she? Soon it's revealed that Luther Crackenthorpe had another son, Edmund, who was killed fighting the Germans in 1940, but not before sending a letter home announcing that he was going to marry a French girl named Martine Dubois. Did he marry Martine? Is the dead woman the late Martine Crackenthorpe, killed because she was coming back after all these years to claim a share of the family fortune for herself and a son?

Adapted into the film Murder, She Said in 1961.