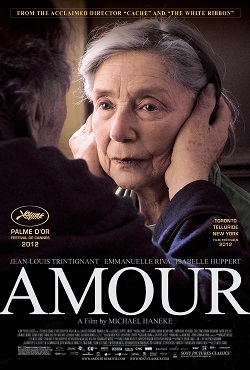 Amour is a 2012 French film directed by Michael Haneke.

Jean-Louis Trintignant and Emmanuelle Riva star as Georges and Anne, a pair of retired music teachers who live out a humble Happily Married existence in Paris. This all changes, however, after Anne has a stroke. The resulting physical debilitation, along with Anne's slowly deteriorating mental state put their love to the ultimate test, as Georges insists on taking care of Anne himself.

The film received unanimous praise from critics (with a 94% rating on both Rotten Tomatoes and Metacritic) for its realistic depictions of life during a long marriage, being a caretaker to a loved one, watching a partner suffer from illness. It went on to win the Palme D'or at the 2012 Cannes Film Festival, along with a slew of other accolades. It later received five Academy Award nominations, including Best Picture, Best Director, and Best Actress, and won the award for Best Foreign Language Film. Director Haneke stated that the film is Based on a True Story from experiences he witnessed in his own family.