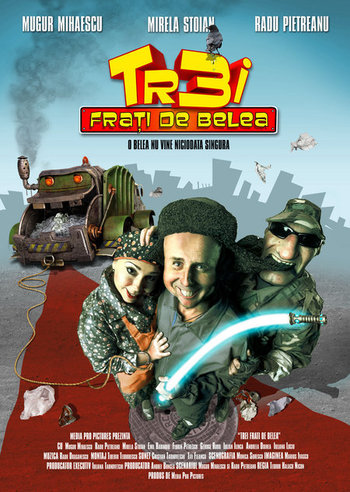 The movie is about three siblings: Cornel (Radu Pietreanu) who works as a dog catcher; Leonica (Mirela Stoian) who is unemployed, but whose husband Aurel (George Robu) works as a guard; and Bizo, the youngest brother, who works as a garbage man. They have all moved to Bucharest and have families (except for Bizo, who is still single). Cornel and Leonica try to find him a date, but he eventually finds a girl he falls in love with. However, she turns out to be the daughter of "King Sigismund" of the Gypsies (Florin Petrescu).

When Sigismund finds out that Bizo wants to marry his daughter, he tells him he must to perform three tasks: the "dexterity" test, to turn off the light at the Dinaom-Rapid football match; the "guts" test, to cut a strand from the President's hair; and finally, the "money" test, which involves robbing a bank. While Bizo's siblings help, the king's son Frankfurt is sent to sabotage their work, while the King's adviser Egret (Emil Rădinoiu) conspires against him, planning to take all the money, overthrow the King, take his place, and finally marry the King's daughter himself.