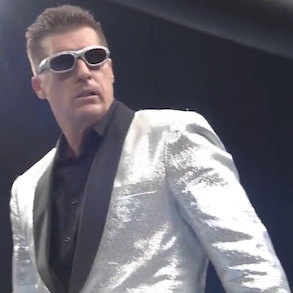 Richard Bruce Tharpe (born 1961) is an American attorney born in Tampa, Florida and residing in Brownsville, Texas who was the president of the National Wrestling Alliance from 2012-2017.

The son of Chet Tharpe, the wrestling announcer for the NWA territory, Championship Wrestling from Florida, Tharpe started working for the company at 14 selling drinks. During this time, Tharpe did a a magic trick that caught the eye of CWF owner, booker and wrestler, Eddie Graham. Impressed with Bruce’s unwillingness to reveal how he did the trick, even to his own father, Graham gave him a job in the front office at 18, trusting him with the then strict Kayfabe of pro wrestling and other confidential information. Eventually, Tharpe worked his way up to working as ring announcer and then a referee.

Encouraged by his father to focus on his education, Tharpe went to first the University of South Florida then South Texas College of Law in Houston, TX and became a lawyer. As he worked for the district attorney's office in Brownsville, Tharpe began to train as a wrestler with Zar Rojo, a Masked Luchador from Matamoros. In the early ‘90s, he wrestled in promotions in Texas and Mexico as Modelo Enmascarado aka the Maked Model and later Supermodel when he was unmasked.

In August 2012, Tharpe’s company International Wrestling Corp, LLC, sued NWA’s then-parent company, Trobich's Pro Wrestling Organization LLC, for insurance fraud. The case was settled out of court with IWC, LLC becoming the owners of the NWA with Thapre as its president.

During his run with the company, Tharpe changed the NWA’s membership system causing many territories to leave or fold in the interim.note Specifically, he changed the NWA from a membership model to a licensee model. For most of its existence, NWA members paid fees to the promotion in exchange for a geographical territory exclusive to them (other NWA promotions would not invade their "turf") and access to a talent swapping program that kept a fresh roster rotation. There was also the NWA world champion, an over-champion whose title superseded the main titles of the NWA member promotions; the champion would travel from promotion to promotion feuding with top wrestlers and would usually draw record ticket sales for the host company. All NWA members had the right to vote on who would be the world champion, who would almost always be a wrestler willing and able to hold to the strenuous work schedule meant to keep all member promotions happy. In the change to a licensee model, many of these benefits went away. A licensee would pay a fee to the NWA not for membership, but for the right to advertise their promotions as NWA affiliates and their titles as NWA sanctioned. They would have no say in NWA activities nor in who would be given NWA world title reigns and had no guarantees that the world champion would compete in their promotion, which eliminated one of the NWA members' biggest draws for fans. Almost immediately, several NWA members cut ties with the brand, including Championship Wrestling from Hollywood, which at the time was the brand's flagship promotion with a weekly television program. Beginning in March, 2013, the NWA entered a relationship with New Japan Pro-Wrestling. What started with Tharpe going over to New Japan shows to put over his talent as company president, quickly turned him into a over the top Heel that actively cheated for his talent and cut condensing promos to the crowd.

On March, 2016, NWA’s partnership with New Japan expired. On May 1, 2017, Bruce Tharpe sold the NWA to Lightning One, Inc. owned by The Smashing Pumpkins frontman Billy Corgan.

Tharpe currently continues his law practice in Brownsville while remaining a huge fan of pro wrestling.