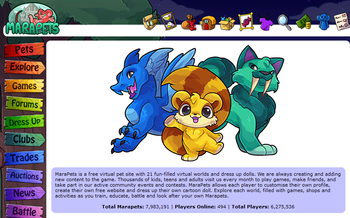 Marapets is a free virtual pet site, similar to Neopets.

as a 'guild' created by 14-year-old Ian, called "Maraqua" within Neopets. When he made it, he had no intentions of creating a pet site. Soon after the guild was made, Ian created a Web site called Maraqua.com. Almost all the members of said guild joined the website, which had forums, game hints, and pet release news. However, the guild was frozen by the administrators of Neopets shortly after it was made.

Ian, now 15, and his co-founder, Laimay, (who was 19) had lost hope to bring back the Maraqua guild. Working together, they founded Marapets in 2005. Today, Ian still serves as the owner and Laimay is the artist.

The basic pet site formula that exists in Neopets is present here, too: Users create pets, raise and care for them, train them for battles, or even give them jobs. The site has many, many users who play it.

Marapets and its elements contain examples of the following tropes: