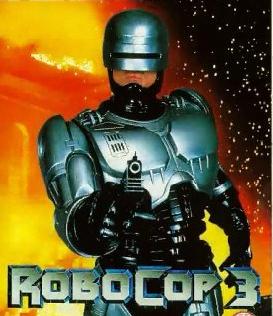 Back on line. Back on duty.
Advertisement:

The second and last sequel in the original RoboCop film franchise, released in 1993.

OCP is working to finish what they've been trying to do in the first two movies — tear down Detroit, a city they deem as "beyond saving", and rebuild it as Delta City. As usual, it comes down to Murphy vs. OCP. RoboCop (now played by Robert John Burke) finds himself working to keep OCP from forcibly removing citizens to make way for "a better Detroit," and along the way, he gets a Jet Pack and fights robot ninjas.

OCP CEO: Well, I gotta hand it to ya... What do they call you? Murphy, is it?
RoboCop: My friends call me Murphy. You call me... RoboCop.