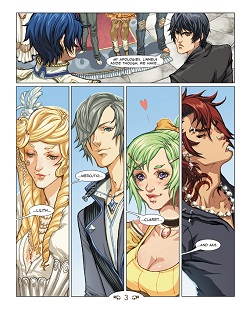 Atros and his courtesans (sans Linneus and Rory)
"Who can remember faces when they're buried in pillows the entire time?"
— Rhys
Advertisement:

(NSFW) A fuller version was also available for purchase.

The webcomic illustrates the lives of the owner, courtesans, and clients of a brothel called the Teahouse, located in the fictional country of Ivore. The country itself has a rather rigid class system in place, and the courtesans belong to the brothel's owner, much like slaves. The main source of drama is the three couples of the series: Atros, the brothel's owner and Linneus, his childhood friend, now his courtesan, Rhys, the crown prince of the country and Axis, an easily-irritable high-earning employee of the Teahouse, and Rory, a newcomer and virgin to the Toyhouse and his first employee, Reed, a high-ranking lord and Rhys's best friend. Surrounding these couples is a wide variety of personalities, keeping it all interesting.

And, you know, the Fanservice.

The art is impressive, especially for a webcomic, and it ran in a weekly format (just barely though, as the authors dealt with a lot of real life issues, thus putting the comic on constant mini-hiatuses, resulting in a lot of Fan Dumb and white knighting), and occasional double update months.

On November 26, 2014, the series abruptly ended. Five chapters were published of the projected fifteen to twenty. A full summary of the unpublished plots of the three couples and the additional characters is available on the webcomic's Tumblr.