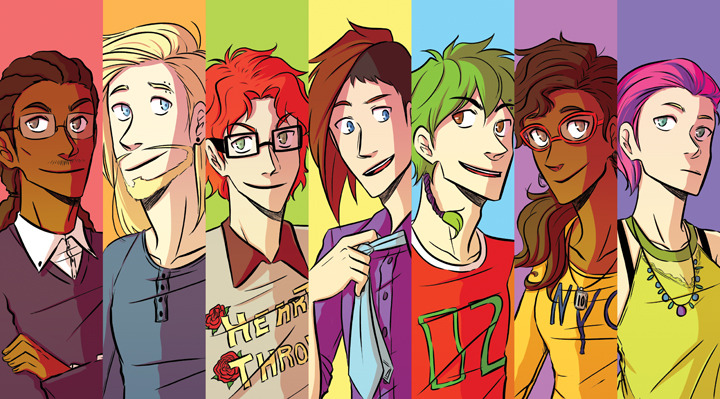 Hazy London (formerly known as Technicolor London)note The author, Scotty, has had to change the title of her comic for legal reasons. Apparently, the company Technicolor (yes, that one

) contacted her with a Copyright Infringement claim, as her comic was interfering with their London branch because it was the top search. is a Slice of Life webcomic about a group of people who are in a band called Checkerboard, and their day to day interactions with each other. The main focus is on the lead singer and drummer, Toby and Mark, forming a relationship at the beginning of the comic and their trials and tribulations as a couple. However, there is also plenty of light shown onto other characters, such as Sarah, Toby's best friend and the band's manager, and Kate, Toby's ex-girlfriend and bassist.

Updates are Mondays, Wednesdays and Fridays. The first page can be found here

, and the latest page can be found here.

As for the author, Crystal Jayme (or as she likes to be called, Scotty), you can find her tumblr here