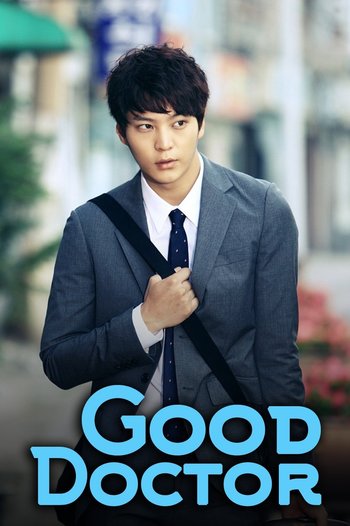 A 2013 Korean Medical Drama about a young paediatric surgeon with autism. Si-on/Shi-on* depending on the transcription. It's pronounced 'Shaun' but with two syllables. is an amazing savant, but not-so amazing with people. He begins his residency at Sungwon University Hospital, where his mentor Dr. Choi works. He is put under the trust of Do-han, or Dr. Kim, another talented young paediatric surgeon, but they but heads over Si-on's ability to work. The pair form a professional rivalry, and a personal one over another peds resident, Dr. Cha.
Advertisement:

It ran for 20 episodes in the summer/fall of 2013, and spawned an American remake in 2017, The Good Doctor starring Freddie Highmore as Shaun. It's generally remembered in the West for having one of the worst modern portrayals of autism out there, especially compared to the American remake.

A Japanese remake of the same name, Good Doctor (グッド ドクター, Guddo Dokuta) was aired in 2018, starring Kento Yamazaki as Minato Shindo, Juri Ueno as Natsumi Seto, and Naohito Fujiki as Seiji Takayama. It ran for a mere 10 episodes, but was well-received.