Film / The Man from Nowhere 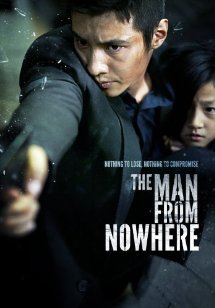 The Man from Nowhere, also known as Ajeossi, is a South Korean action film that opened in August 4, 2010 and is directed by Lee Jeong-beom.

It centers around an ex-Army Intelligence Command operator turned quiet pawnshop owner named Cha Tae-Sik, who is unexpectedly flung into a conflict between the Kkangpae and South Korean narcotics detectives. However, Cha later takes things personally when a child he knows becomes embroiled in the conflict.