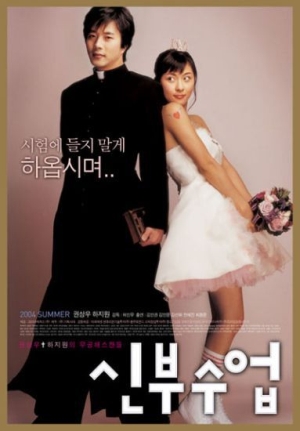 "If seminarians don't get married... how do they resolve their desires?"
Bong-hee

Love, So Divine is a 2004 South Korean Romantic Comedy.

After getting in trouble at their seminary, young priests-to-be Kim Kyushik (Kwon Sang-Woo) and his best friend Seon-dal are sent away to rural South Korea for a month to serve Father Nam and his church as punishment. There he meets Bong-Hee, a flighty Korean-American girl who followed her boyfriend to Korea, and happens to be father Nam's niece. However, after Bong-Hee's boyfriend dumps her, she finds herself stranded with nowhere to go. Despite clashing because of Kyushik's somewhat wooden personality and Bong-hee's selfishness along with many misadventures , they slowly become attracted to each other. As a result, Kyushik is forced to question the life of celibacy that lies ahead for him.