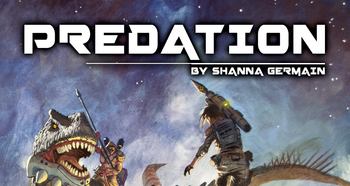 Predation is a Tabletop RPG setting designed for the Cypher System by Monte Cook Games, adapted to bring in dinosaurs and science by stranding players in the Mesozoic era and allowing them to play as both humans and dinosaurs.

Welcome to the Cretaceous.

A megacorporation from the future known as SATI starts sending people to the late Cretaceous period. But time travel stopped working: those commuters are stranded in the past, with dangerous predators, no access to future technology, and as the colony was settled from the future, everyone knows that an asteroid heading for Earth would cause an unavoidable cataclysm. Predation is set about a century after the Last Commute: there are some very old commuters still alive, but the player characters are likely third generation.

The dinosaurs aren't just there for scenery or as monsters to be killed. The commuters learned how to domesticate dinosaurs, so each PC has a pet (usually a dinosaur). The player, however, does not control the companion; it is controlled by another player, and the rules treat the companion as a player character with its own personality.

Predation is compatible with all other Cypher games, so if you need a bioengineered dinosaur to show up in the Ninth World, or want to step into a Cretaceous recursion in The Strange you can easily pull from here, and there is a crossover guide that allows you to use Predation with Numenera and The Strange or both.