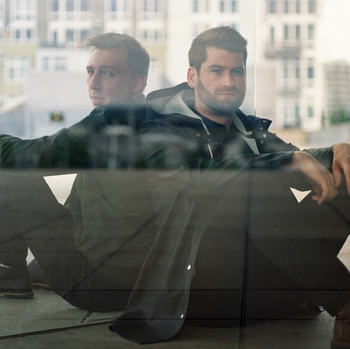 ODESZA is an electronic music duo comprised of producers Harrison Mills and Clayton Knight. Originally starting off with their own solo aliases (CatacombKid and BeachesBeaches, respectively), the pair started collaborating on music in 2012, during their senior year in college at Western Washington University in Bellevue, WA, and became well-regarded crafters of indietronica and electropop over the course of the next decade.

With a name inspired by a sunken ship once owned by Mills’ uncle, their first release, the album Summer’s Gone, was self-released by the duo in September 2012 not long after the band’s initial formation. Early success online as part of the then-burgeoning chillwave scene led to Mills and Knight’s commercial breakthrough with In Return in 2014, with singles like “Sun Models,” “Say My Name” and “All We Need” propelling them to the upper echelons of electronic acts.

Mills and Knight launched their own record label, Foreign Family Collective, in 2015. The same year saw ODESZA launch an elaborate live show building on the duo’s work on In Return, with a full marching band accompanying them on stage at festivals like Coachella and Bonnaroo. The band kept the momentum going with a new album, A Moment Apart, in 2017. Singles like “Line of Sight” and “Late Night” continued the last album’s sonic trajectory, but the duo would also dabble in new sounds on the record, collaborating with artists outside of electronica like Leon Bridges and Regina Spektor and integrating the live band elements in some of the tracks included on the album’s deluxe edition.

After touring for nearly two years in support for A Moment Apart, Knight and Mills announced in 2020 that they would be forming supergroup BRONSON with fellow producer and friend Golden Features. BRONSON’s self-titled record released in August of that year, with a much darker, house and bass-influenced sound than the band’s usual fare.