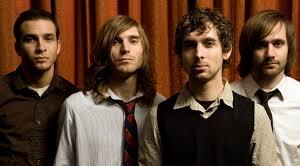 Let us tell you a story.
"So be brave, outside there are dangers
I might fall down into the ages,
I might stall out with all the stars off,
but for you I'll go."
— Falling Up, "In The Woodshop"
Advertisement:

Falling Up were an Alternative Rock band originating from Albany, Oregon. Originally the group was pegged as the Christian version of Linkin Park, but they developed into a very experimental band with a penchant for Science Fiction ConceptAlbums. In fact lead singer Jessy C. Ribordy has revealed that every album after the first one tells stories that take place in the same universe. Now what these stories are tend to be open to interpretation to say the least.

Originally gaining a following with their debut album "Crashings", on Tooth & Nail Records, the band progressively changed their sound with each album, before really jumping ship and releasing their first official Concept Album “Fangs”. The underwhelming success of said album prompted the band to leave their record label and go independent. Falling Up then proceeded to release four critically acclaimed albums and a number of side albums before finally calling it a day in 2015 with the final album “Falling Up”.

Tropes associated with Falling Up include: