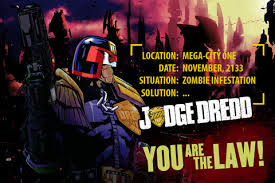 What's a few undead to a judge?
Advertisement:

Judge Dredd vs. Zombies is a top-down shooter for iOS, made by Rebellion Developments using the Free2Play model. It was released in 2011 to promote the then-upcoming film reboot of the franchise. Unlike most licensed games, however, it has nothing to do with the film’s plot, taking place in some unnamed continuity where zombie virus outbreaks have occurred in several sectors and Judge Dredd is the only one capable enough to stop them. The game is frequently updated: at the moment, there are 30 main levels in three groups of 10, three arenas where the goal is to survive as long as possible and the Psi mission mechanic, which allow the player to obtain bonuses by being logged in at the right time.