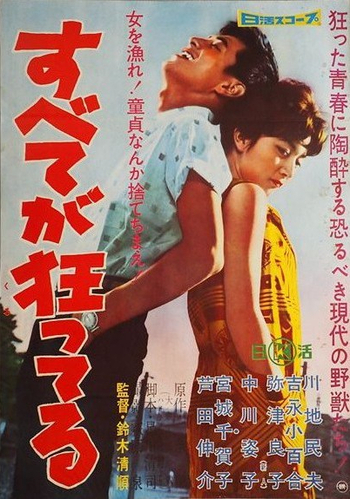 Everything Goes Wrong is a 1960 film from Japan directed by Seijun Suzuki.

It's a story of wayward, rebellious Japanese youth. The protagonist is Jiro, a young man who could be getting ready to go to college but seems more interested in drinking, smoking, and engaging in petty crime with his fellow rebellious teens. Toshimi, a lovely young girl who hangs out with the gang of teen hoodlums, is infatuated with Jiro, but he remains emotionally distant from her even as they start a sexual relationship.

The main reason for Jiro's rage, aside from general Jerkassery, is his home life. His father is long dead, killed in the war. His mother Misayo is the kept woman of Mr. Nanbara, a married businessman who has been financially supporting Misayo for years. Mr. Nanbara is a gentle man and it seems he and Misayo genuinely care about each other, but Jiro hates his mother for being The Mistress and hates Mr. Nanbara for keeping her. His seething aggression eventually has disastrous consequences.

A subplot follows Etsuko, another young lady who hangs out wit the gang, who is left scrounging for the money to get an abortion after her boyfriend knocks her up.