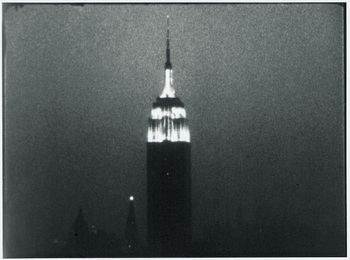 Empire is a 1964 film created by Andy Warhol.

It is an eight hour, five minute static shot of the Empire State Building.

No, we're not kidding.

Andy Warhol was an experimental artist who is probably still most famous today for his collages of Marilyn Monroe and Campbell's Soup cans. During this era he was making decidedly unconventional films, like Sleep, a 5 hour, 20 minute film of a man sleeping. In April 1964, the upper stories of the Empire State Building were lit by floodlights to commemorate the 1964 World's Fair. It was the first time the upper part of the building had been lit up at night, and it was the only skyscraper on the island that was lit up. Warhol chose to capture it in a film.

Cameras were set up in a room in Rockefeller Center. Filming started at 8:06 pm on July 24, 1964, right before sunset. The film starts with a white background, which fades into a shot of the Empire State Building as the sun is setting. The camera never moves. There are no cuts. There is no sound. Nothing happens. Filming ended at 2:24 am on the 25th. Warhol said the purpose of Empire was "to see time go by."