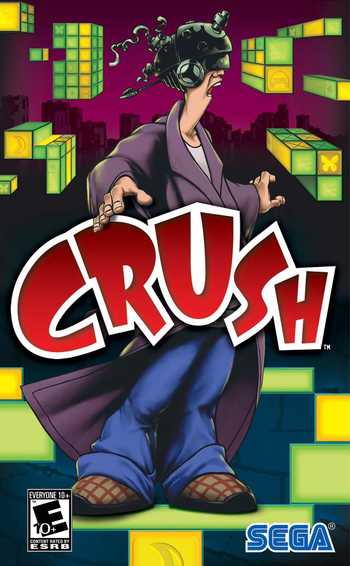 Crush is a Sega platform/puzzle game originally released for the PlayStation Portable. The game's main feature is the ability to "crush" a 3D environment into 2D. This can be used to reach extremely high or low platforms when crushed vertically, or to cross insurmountable gaps if crushed horizontally.

The plot of the game focuses on Danny, a young adult who's been hospitalized due to his chronic insomnia. Willing to pay any price to get over his mental problems, he seeks the help of a mad scientist known as Dr. Reubens. Using the Doc's Cognitive Regression Utilizing pSychiatric Heuristics device (C.R.U.S.H. for short), Danny must conquer physical manifestations of his mind and memories in order to deal with the problems from his past.

There is also a remake for the Nintendo 3DS, titled Crush3d (pronounced "crushed"). Updated graphics aside, the remake's plot is more lighthearted than the original; rather than being a mental case, Danny is a young boy that is friends with Dr. Doccerson (instead of Dr. Reubens). After testing C.R.U.S.H. for him, Danny becomes trapped inside, and must use his crushing abilities to help C.R.U.S.H.'s AI with its problems rather than his own.

Tropes that are included in both versions of Crush: