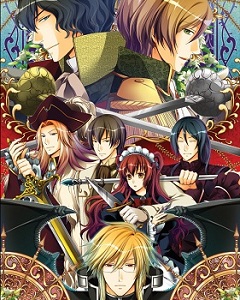 Crimson Empire ~Circumstances to serve a noble~ is an otome game from Quinrose set in the same universe as Arabians Lost, proved to be popular enough to warrant a fan disk and a short manga not to mention several ports, drama CD's and some novelized books with side stories.

Sheila Rozann as a kid, was sold by her family as a slave. She met a demon while she was at the slaver's place who told her that she would be successful and offered her a Faustian Bargain. She was later bought by an assassins guild and was trained to be an assassin. But after a little fight with the guild master, a legendary assassin, she was sold again. Now, to be a bodyguard for the nobility.

Sheila now the head maid under the service of the second prince Edvard Winfree, would do anything to assist him to the throne.