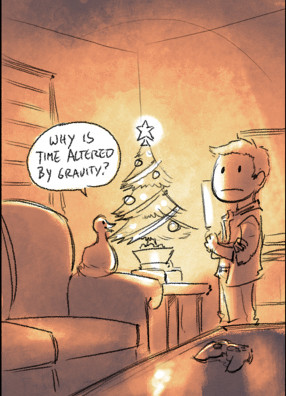 Well, you have to start with the idea of relativity...
Advertisement:

was a gag-a-day comic by Psudonym. The gag always consists of the title duck asking an off-the-wall question, in a wide variety of settings Once per Episode.

Some have answers, and some don't, but far more often than not, they are incongruous in the setting.

The strip went on hiatus in early 2012, as Psudonym turned her focus to other works, including various short stories and collaborative projects with writer Gunwild. In January 2014, she returned to the strip, updating it once a week or so... and then put it back on hiatus in May to pursue other projects, foremost among them Cassiopeia Quinn. Now with the demise of Smack Jeeves, it's unlikely to ever be returned to again.