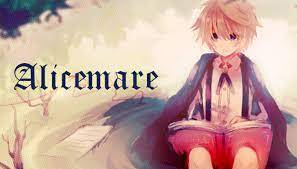 Alice Mare is a Wolf RPG Editor adventure game with a tiny bit of horror made by Miwashiba.

You play as a young boy named Allen who has been sent to a special facility after losing his memories. While there, he forms a bond with the other children there, as well as their kindly caregiver Teacher. While investigating some strange things happening at night, he finds himself in another world where he ends up exploring the "hearts" of the other four children in the facility. Aided by a mysterious creature calling himself the White Rabbit, Allen and his friends must find their way out of the dream; but the mischievous Cheshire Cat is trying to obstruct their progress...

It was translated into English by vgperson. You can find it here

. It is also available on Steam

A novelization of Alice Mare is available on Amazon here

. An English translation has been provided by vgperson, found here

Alice Mare has examples of the following tropes: