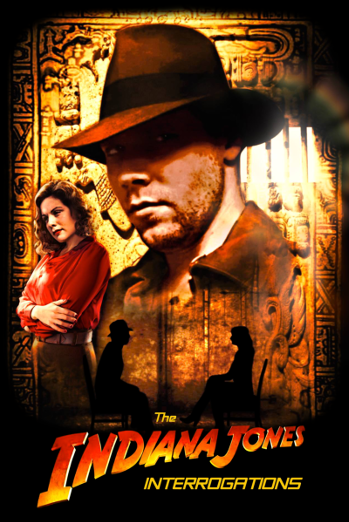 June, 1937, while on an expedition, Nazi soldiers ambushed your party. It was here that you were subdued, and transported to the bunker, correct? Nazi sympathizer 'Claire Capshaw' started a series of interrogations? We wanted your reassurance, that during these interrogations, you did not reveal any, uh, American secrets to your captors. We can trust you, right Dr. Jones?
— Main Trailer

The Indiana Jones Interrogations is a miniseries created by Jonathan Rogers and Jonas Acuff. A seven-installment fan film for the Indiana Jones character, the series is in a Found Footage format that makes sense for the character's time period—degraded interrogation footage taken by his Nazi captors while he is their prisoner in the year 1937. Indy is forced to cooperate with a former student of his, Dr. Claire Capshaw, who has defected to Germany, adding salt to Indy's torture wounds.

The show is designed as a character piece for Indiana Jones, partly out of necessity thanks to a limited budget and production values, and partly to help it stand out as a unique creation. The series has been steadily building a cult following, and received positive reviews from sites like The Geek Speak Show, The 7th Matrix, The Bearded Trio, and even was featured on the Indy Cast.

The Complete Series album on Vimeo