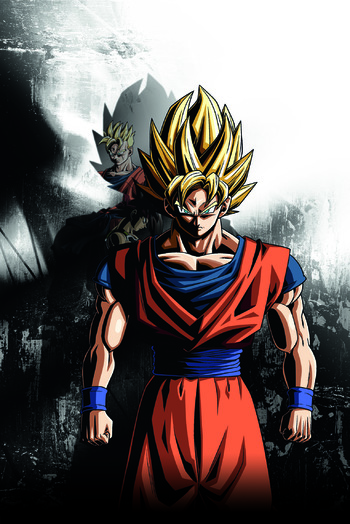 The past... the future... outcomes with different possibilities.
Dark forces gather at the edge of time itself, awakening enemies of the past to destroy the heroes of today...
But at every corner of history, they will find us there to stop them!
— Launch trailer

Dragon Ball Xenoverse 2 is a sequel to Dragon Ball Xenoverse, once again developed by Dimps for the PlayStation 4, Xbox One, and Microsoft Windows (via Steam). A Nintendo Switch version was confirmed on 13th January 2017, released on September 22nd of the same year. This version will support local multiplayer in all of the Switch's play modes. Also, a Google Stadia was released on December 17, 2019.

Playable Characters
Note: New characters will be highlighted in italics and new transformations will be bolded.
Advertisement:
NPC Characters