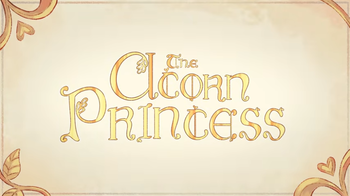 The Acorn Princess is a short animated film released in 2020 by Tough Nut Studios.

The film follows The Acorn Princess, Cornelia, and her soon to be fiancé and friend, Flower Prince. Although they really like each other, they're both in love with other people, with Cornelia being in love with a knight called Nutalia.

Has nothing to do with Sally Acorn.