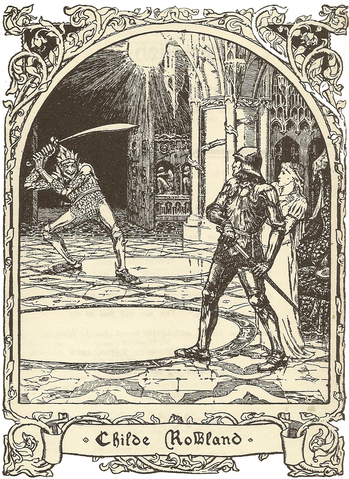 Illustration by John D. Batten (1892)
And he went along, and along, and along, and still further along, till he came to the horseherd of the King of Elfland feeding his horses. These he knew by their fiery eyes, and he knew that he was at last in the land of Fairy.

" is a Fairy Tale, the most popular version having been published by Joseph Jacobs in his English Folk and Fairy Tales in 1892. It is said to be based on a Scottish ballad, which is why the text alternates between prose and rhyming stanzas.

Four children of a queen— Childe Rowland, his two older brothers and his sister, Burd Ellen— play ball near a church. When Rowland kicks the ball over the church, Burd Ellen goes to retrieve it, inadvertently circling the church "widershins", or opposite the way of the sun, and disappears. Rowland goes to Merlin to ask what became of his sister and is told that she has been taken to the Dark Tower by the King of Elfland, and that only the boldest knight in Christendom can retrieve her. The remainder of the tale follows Childe Rowland's attempt to save his sister, venturing to the Dark Tower of Elfland.

Child Rowland to the dark tower came,
His word was still 'Fie, foh, and fum
I smell the blood of a British man.'

It is on the grounds of the King Lear lines that Joseph Jacobs called the King of Elfland's palace "the Dark Tower" in his version, as this name was not in the immediate source he used.

The tale has been referenced in many works, including Stephen King's The Dark Tower series, Lord Dunsany's 1924 novel The King of Elfland's Daughter, Alan Garner's 1965 novel Elidor, Terry Pratchett's The Wee Free Men and even Alastair Reynolds' 2003 novella Diamond Dogs. The fairy tale was also used in Martin Carthy's song "Jack Rowland" and a radio drama based on the tale. Despite the title, "Childe Rowland" has no close connection to Robert Browning's "Childe Roland to the Dark Tower Came" (1855) (which is named for the King Lear lines).