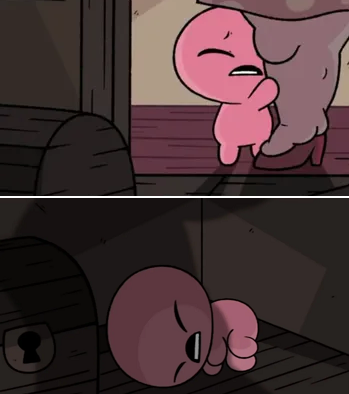 "After all I've done for you, this is how you view me? You think I'm a monster, Isaac? I'll show you a monster!"
A stock way of implying an Abusive Parent is to have them lock their child in a closet as punishment. If not a closet then something similar like a cellar or attic also works. This trope is used by adults in general towards children, however it's most commonly done by parents.
Advertisement:

The effectiveness of this as a punishment relies on childhood fears of Things That Go "Bump" in the Night and the Primal Fear of small enclosures.

Don't Make Me Take My Belt Off!, Go to Your Room!, Time Out, and Dunce Cap are other childhood punishments. Compare Locked in a Room, where two or more characters are locked in a confined space and must spend the episode/chapter/etc. together, and Punishment Box, for when people (usually prisoners) are put in a small enclosure. See also Locked in a Freezer, Anti-Interference Lock Up, Iron Maiden, and Ten Minutes in the Closet.

If you're thinking about that closet, see Get Back in the Closet.