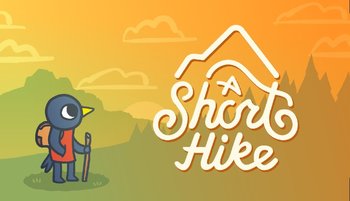 "Claire, you're gonna have a great time this summer! I think. It will be good to get away from the city and take a break from everything else going on."
Advertisement:

A Short Hike is a 2019 indie adventure game made and released by adamgryu.

The game follows Claire, a young bird girl that is taken on a trip to Hawk Peak Provincial Park. While there, she realizes that she has no cellphone reception and is waiting for an important call. She is, however, told she may be able to get some reception if she gets to the top of Hawk Peak.