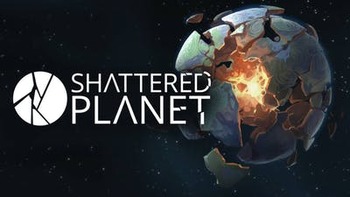 Explore a new world, and die trying. Then do it all over again.
Advertisement:

Shattered Planet is a roguelike created by Kitfox Games

and released in 2014. Available for iOS, Android, PC, and on Steam. In it you play as a Clone who is beamed down to the shattered remains of Earth, finding and cataloging new stuff, and then dying in the process. Luckily, an alien Gekko scientist is able to re-create the clone, allowing the player to repeat the process. Overly humorous in tone.