Video Game / Shadow Of The Wyrm 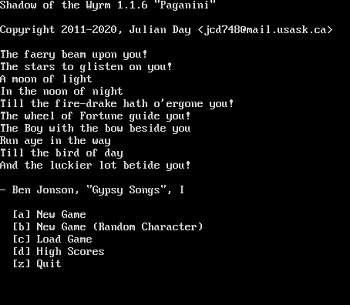 The menu, with one of the randomly selected fantasy quotations greeting you.
Shadow of the Wyrm is a traditional fantasy Roguelike by Julian Day, who has been working on it since 2011. Though it has hit version 1.0 a while back, new additions are happening to this day. The current version of the game can be downloaded here

After creating your character by picking from 9 races and 19 classes, as well as a deity and a place of birth (or just letting the game decide by picking a randomly generated character) you are thrust into its world. According to the backstory on the game's website, your character got shipwrecked, and is now washed up on the shore of a small island. Nearby are a small village, a ruined keep, and an ancient dungeon. In the far distance lie lands full of elves and dragons, monsters and demons. A cold wind blows; there is chaos on the air. Your survival, and maybe even success, is now entirely in your hands.

Tropes of the Wyrm: