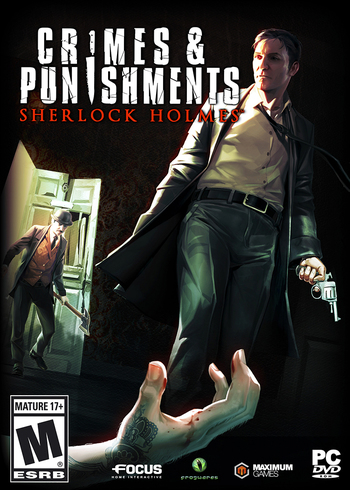 Sherlock Holmes: Crimes & Punishments was published by Focus Home Interactive and developed by Frogwares. Released on September 30th, 2014, it is the seventh installment of the Adventures of Sherlock Holmes series. Like the other games, it is a detective adventure game and requires the player to solve a number of criminal cases as the famous detective Sherlock Holmes. Plotwise, there is little connection between the cases beyond the rise of Anarchism in the region.
Advertisement:

The game brought some new features into the series, such as the ability to observe and analyze suspects, or several quick-time-events. Unlike its six predecessors, it features not one criminal case, but several, which have no overarching plot. (The anarcho-socialist group the Merry Men serve as de facto primary antagonists, but bear no direct connection to the majority of cases in the game.)