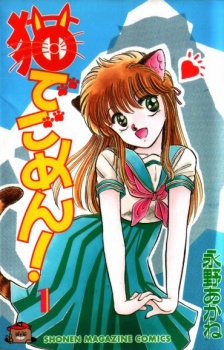 Neko-de Gomen! (Sorry, I'm a Cat!) is a manga released in 1989 by Nagano Akane. Its plot focuses on a Ordinary High-School Student named Shiraishi Yayoi as she tries to live a normal life after being turned into a Cat Girl by her father's teleporter. Shortly thereafter, the ineffectual Mad Scientist Kuroda creates a very large Venus fly trap that ends up attacking the city. Seeing this on the news, Yayori's father decides to send her out to fight them as Super Cat Yayoi. Surprisingly, this works out rather well.

What follows is a hurricane of bizarre and often amusing situations, mostly caused by Kuroda's equally bizarre inventions and Yayori's new cat instincts. All the while, Yayoi tries to keep the fact that she's part cat a secret yet somehow manages to both fail spectacularly and succeed at the same time.