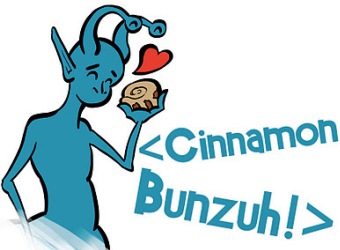 Do you recall the Animorphs? A series of books about five (later six) teenagers who are granted the ability to transform into any animal so that they can defend the earth from a body-stealing alien menace? Well, we do. That's why we're going to review them. All 64 books, from start to finish. Here we go.
Advertisement:

Cinnamon Bunzuh! is a comedic review blog of the Animorphs series, published as instant messaging logs between the two authors, Ifi (the crazy sarcastic one), and Adam (the crazy analytic one).

The series is named after the way the character Ax pronounces "Cinnamon Bun" when he starts using a mouth for the first time.

The site also hosted the fanfiction Six Days the Animorphs Were Idiots, written by Ifi.

Now concluded. As of June 18th, 2020, the blog has been taken down due to a combination of embarrassment and the possibility of an Animorphs movie reboot. More information here.

This review series provides examples of: