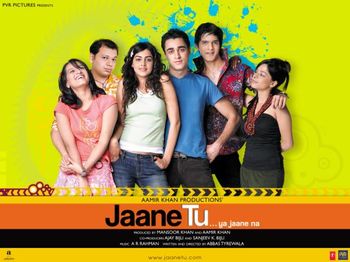 Jaane Tu... Ya Jaane Na ("Whether you know it... Or not") was a critically and commercially successful Bollywood musical, released in the summer of 2008. The story centers around four longtime friends narrating the love story of their friends Jai and Aditi.
Advertisement:

Jaane Tu... Ya Jaane Na follows six friends after college— Jai, Aditi, Shaleen, Jiggy, Rotlu, and "Bombs". The movie begins with the friends besides Jai and Aditi telling the story of those two friends to Jiggy's new girlfriend while they wait at the airport for them to arrive.

Jai and Aditi are the closest friends through five years of college, and they lead the close-knit group. Everyone assumes that they are deeply in love because they act so close and are constantly together, but they swear they are just friends. Both decide that to adjust to being on seperate continents from each other after college, they decide to give each other space and find a good match for each other. Jei gets a girl named Meghna, and they become so infatuated that they leave the rest of the group behind. Meghna puts a rift between Jai and Aditi, and they drift apart because of his relationship. Just as Jai begins to become unhappy with Meghna, Aditi finds herself a guy. With marriage proposals on the way and engagements, it looks like the two would be better off not admitting their feelings at all.

The whole story of their relationship is also intertwined by the story of how Jai becomes a man through the rite of passage that the savage group his Disappeared Dad belonged to. Hilarity Ensues.

It can be watched for free (legally) here