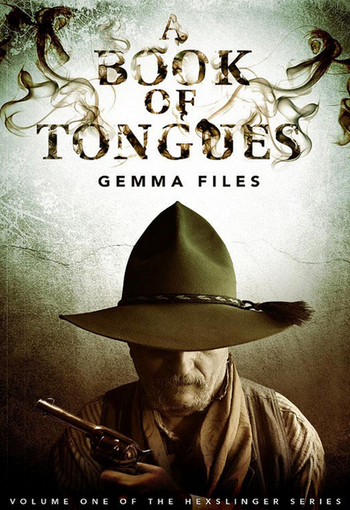 Set in the 1860s in the wake of The American Civil War, the series takes place in an Alternate History Earth where occasionally, ordinary men or women will manifest as powerful magicians (called "hexes" most often by the main characters) after either near-fatal injury (for men) or their first menstrual period (for women). These hexes are capable of great feats of magic individually, but have been footnotes in history for one key reason: hexes cannot spend any significant time in proximity, or work together on magical acts, because they will be driven by instinctive hunger to feed off each other's power until one or the other is dead. (The Catchphrase of this limitation is: "Mages don't meddle.") This fundamental stumbling block has kept hexes from ever cooperating to discover exactly how their powers work, or to establish any consistent group magical tradition beyond what is learned in short, dangerous and often fatal informal apprenticeships; as a result, every hexnote (in Western-descended cultures, at least) is basically a self-taught magical island unto himself or herself, using individual tricks and techniques to work their feats.

Enter Reverend Asher Rook, the Big Badnote (initially) of the series, a faith-lost preacher for the Confederates who survives his own hanging (for the murder of his commanding officer, a crime he didn't commit) by manifesting as one of the most powerful hexes ever seen, calling up a tornado to wipe out the Union soldiers who have captured him and his fellows. Considering himself thus damned, he yields to the seduction of gunslinger Chess Pargeter, a nigh-psychopathic killer and unrepentantly openly gay man, and embarks on a career of banditry with his fellow soldiers, using The Bible to work black miracles and render his gang unstoppable. This career of hex-driven crime leads Allan Pinkerton of the Pinkerton Detective Agency to send one of his men, Agent Ed Morrow, in under cover to infiltrate Rook's gang; Morrow's task is to learn as much as he can about the gang, while using a new Magitek device to measure the objective strength of Rook's power.

However, unknown to Chess or Morrow's bosses, Rook has made contact with an ancient fallen power that may give him the capacity to break this hitherto absolute rule of hexation, overturning both natural and political order throughout — potentially — the entire world. And the only person Morrow can call on for help dealing with this is the person on whom Rook's whole scheme rests: Chess Pargeter himself.