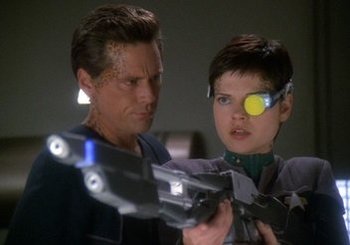 The newest Dax meets the outcast Dax
The episode opens with a throng of DS9 officers at Quark's bar, crowding around a young Lieutenant, Hector Ilario, whose brilliant piloting skills at the conn of the Defiant won them a great victory against overwhelming odds. Bashir and O'Brien raise a toast to their hero of the hour and ask him to name his prize. Anything at all. Well, almost anything.
Ilario: Next time you two go to the holosuite, I'd like to come along.
O'Brien: Oh, well, I'm sorry.
Bashir: Can't be done.
O'Brien: No, it's out of the question.
Bashir: It's impossible.
Advertisement:

As the night grows late and the crowd thins, Ezri escorts the Lieutenant back to his quarters to sleep off the party while gently refusing his inebriated advances.

The next morning, Ezri emerges from her quarters to a commotion in the corridor, which she follows back to Ilario's quarters. The young man lies dead on the floor with a gaping hole in his chest. It appears someone shot him. With a tritanium bullet.

O'Brien: You don't see one of those every day.

Sisko recalls that there is one Federation rifle that uses old-fashioned kinetic slugs, the TR-116, created for environments where phasers would be unreliable. It never made it past the prototype stage, but a Starfleet officer could still replicate one if they wanted to.

There is something else unusual, apart from the implication that Ilario was murdered in cold blood by a fellow officer. According to the forensics, he was shot from only a few centimeters away, but Odo (who has taken a liking to 20th-century Earth crime fiction) notes that there are no powder burns from the rifle's propellant. There is also no evidence that anyone entered or left Ilario's quarters after Ezri dropped him off.

The whole affair is disturbing to everyone, but particularly Ezri, who knows what it feels like to be a violent sociopath. Joran Dax, whose memories she and Jadzia worked so hard to suppress, starts to intrude into her dreams. He can help her, he says. She doesn't know the mind of a killer, but he does.

She doesn't want his help, but she might need it. There is an identical murder the next night, Lt. Greta Vanderweg. No one can see any connection between the two victims, which means as the station's resident psychologist, Ezri is now on the spot to figure out what this mysterious killer's motive is.

Meanwhile, O'Brien has had a "Eureka!" Moment about the method of the killings. He arranges a demonstration for Ezri and Odo where he shoots a melon through a solid wall by attaching a micro-transporter to the bullet. As soon as the rifle fires, the bullet is beamed directly in front of the target with its momentum still intact. With the right kind of scanner, the gun could be fired from anywhere on the station. It explains everything: the close-range impact, the lack of powder burns, and the lack of signs of entry into the victims' quarters.

Well, everything except the killer's inscrutable motive, which still has Ezri stumped. As distasteful as it is, she performs the Rite of Emergence, which brings Joran's memories into her own consciousness. She can now see and talk to him as a walking hallucination, which would be creepy enough even without his stone-cold personality. The first thing they do is go to the armory, where O'Brien's demonstration rifle is. Joran wants Ezri in the perpetrator's mindset by having her peruse the crew quarters for targets. She sets her sights on a random officer and senses the calm control of a dispassionate killer.

Joran: Now you're getting it. You do your killing from a distance. You're cold, methodical. Maybe you're a scientist or a doctor.
Ezri: Maybe... but why kill like this? Why not choose a victim on the Promenade or in Quark's?
Joran: If you want to know the answer... pull the trigger. Find out!

Ezri puts the rifle down, though not without some effort. The gun wasn't loaded, Joran says, but the episode was a bit too real for her all the same. They go looking for more clues in Lt. Vanderweg's quarters next, but everything they find only further reinforces how completely dissimilar she and Ilario were.

Joran is starting to get into Ezri's head. While at Quark's, she trips and tackles a suspect fleeing from security, only narrowly stopping herself from skewering the man with a table knife during the ensuing scuffle. A good thing, since he turns out to have an airtight alibi for the first murder. Only with some pleading does she convince Sisko to keep her on the case. She's had enough of Joran's sociopathy, but before she can put his memories back in the bottle... victim number three is found. Petty Officer Zim Brott, a Bolian.

Ezri finally has a "Eureka!" Moment of her own. All three victims have pictures in their quarters of friends and family laughing. Someone who hates emotion? A Vulcan!

Joran: All Vulcans distrust emotions, but they don't go around killing people for smiling.
Ezri: This one does. Something happened to him. Something so emotionally painful it's making him lose control.

Even if she's right, there are 48 Vulcans stationed on DS9, and with the war on, most of them have suffered a personal loss of some kind. It seems Ezri has gone as far as she can, until fate intervenes on her behalf. She encounters a Vulcan, who seems cold and aloof even by their standards, in the turbolift. Joran is dead certain they've found their man.

Ezri looks him up. His name is Chu'lak, a scientist who served aboard the Grissom until it was destroyed in a fleet engagement.

Joran: Six survivors out of a crew of 1,250.
Ezri: He served on that ship for 10 years. Those people who were killed were his colleagues, his friends.
Joran: That's a painful loss, even for a Vulcan.

It's still not proof, but Ezri agrees with Joran's instinct. She grabs the TR-116 from the wall and finds Chu'lak through the scanner. He's in his quarters, reading her service record. He brings something out from the next room. Another TR-116.

The time for suspicion is over. It's life or death now. Ezri loads the rifle, takes aim, and watches as Chu'lak zeroes her with his own rifle. For the briefest moment, their eyes meet, then Ezri pulls the trigger...

Chu'lak goes down, his own bullet missing Ezri's head by centimeters. She rushes to his quarters where he lies wounded, grasping for his rifle. She takes it from him.

Ezri: Tell me, why did you do it!?
Chu'lak: Because logic demanded it.

Joran implores Ezri to finish the job, but she resists the temptation, calling for a medical team instead.

Her job done, it's time to put Joran's memories to rest again. She returns to her quarters to perform the ritual. In parting, Joran reminds her that he'll still be with her, no longer banished to the depths of the symbiont as he was before. He is as much a part of Dax now as the rest of the hosts.