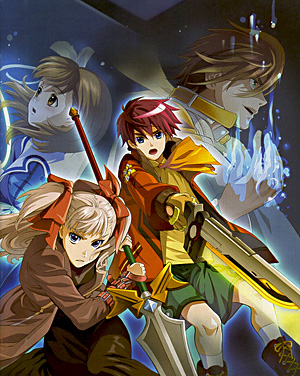 Jude Maverick is a typical teenage boy whose peaceful life is forever changed when a fleet of airships literally break through the sky above his sleepy hometown. With this comes the discovery that his village is actually a massive airborne shelter, one designed to protect its inhabitants from a ravaged wasteland and the military forces seeking a forbidden weapon known as "ARM". In the ensuing battle against the invading army, Jude accidentally "bonds" with the ARM and becomes the host of its incredible power.

Escaping the destruction of the shelter, Jude is forced into the ruined world of Filgaia: a planet that has been pushed to the brink of complete collapse by decades of continual warfare. Pursued by an elite unit known as "Brionac", Jude must discover the secrets behind the "ARM" and what the military plan to do with it, all while struggling to find a place in this harsh new world.

On his journey he is joined by three others: Yulie Ahtreide, whose experimentation at the hands of the army has left her with the ability to control ARMs; Arnaud G. Vasquez, an intelligent but cocky mercenary who takes Jude under his wing; and Raquel Applegate, a swordswoman and artist Walking the Earth in search of its last remnants of beauty.

The gameplay of Wild Arms 4 mixes together RPG and platforming sections, and an experimental new battle system based upon hex grids. While interesting, the system had a few balance issues that were straightened out properly in Wild ARMs 5.