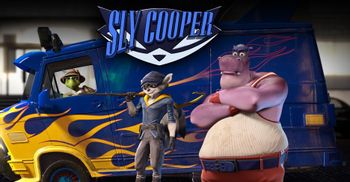 In early 2014, Sony released a trailer for a film based on the Sly Cooper video game series. The film was set to be released in 2016 but due to some hiccups in development, that didn't occur. It was to be the second film based on a Sony mascot franchise, with the first being Ratchet & Clank (2016).

In December 2017, it was confirmed that the film has been cancelled

because of the other film's Box Office Bomb. However, a television series has been announced in its place

with its released date currently unknown.