This page contains folders for the characters of the original graphic novel by Alan Moore and Dave Gibbons only. Tropes applying to adaptations and follow-ups not created and/or not approved by Moore and/or Gibbons belong on the separate pages in the index below. 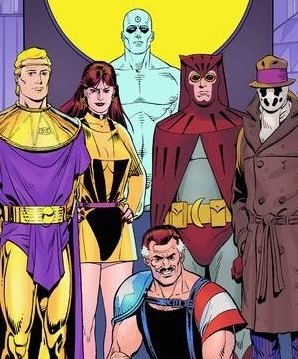 Warning: As Watchmen came out over three decades ago, there will be untagged spoilers from this point forward. Read at your own risk. 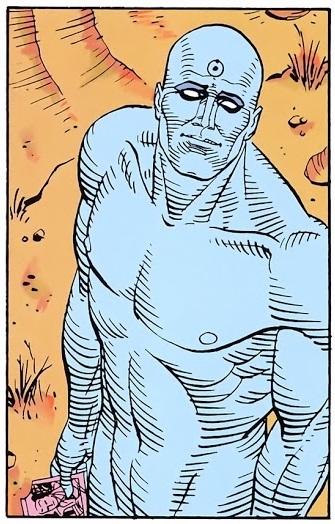 "We're all puppets, Laurie. I'm just a puppet who can see the strings."
"I no longer wish to look at dead things."

The only truly superpowered character in the story, due to a Freak Lab Accident, Jon Osterman gained godlike powers. He's used his powers to revolutionize the world, provide energy for electric cars and blimps, and continues to work on amazing new technology... but as time has passed he has turned more emotionally distant to the people around him and indifferent towards humankind in general, and just doesn't seem to care about anything any more, or do anything unless he's told to. 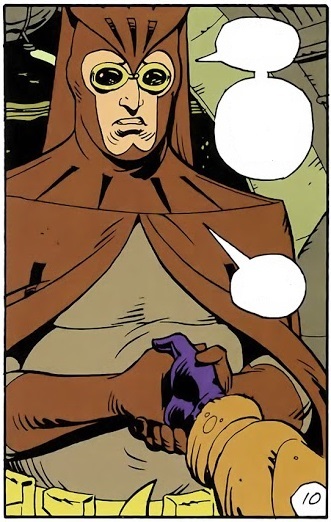 "It's all crap. Who needs all this hardware to catch hookers and purse-snatchers?"
Rorschach: Used to come here often, back when we were partners.
Dreiberg: Oh. Uh, yeah... yeah, those were great times, Rorschach. Great times. Whatever happened to them?
Rorschach: [exiting] You quit.

A former superhero fan, then full-fledged superhero, and now retired intellectual. A gadget-based hero who flies the night skies in his state-of-the-art airship, Archie, he sometimes questions his use of million-dollar technology to fight petty crime. 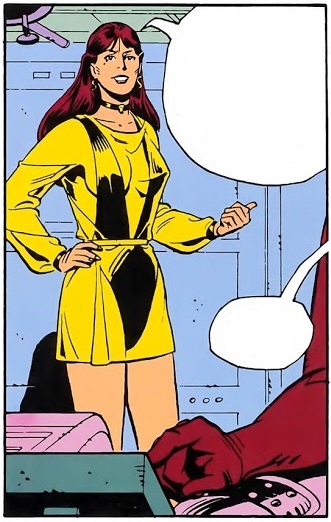 "I don't know anybody! I don't know anyone except goddamned superheroes!"
"I'm used to going out at 3 in the morning and doing something stupid."
Stage-mothered almost from birth into continuing her mother's legacy, Laurie has become very bitter and disillusioned since the Keene Act and starts out in the story as Dr Manhattan's girlfriend.
Ozymandias (Adrian Veidt)
Advertisement:
Rorschach (Walter Kovacs)
The Comedian (Edward Blake) 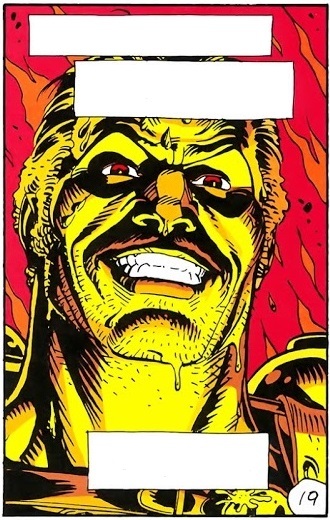 "Whatever happened to the American Dream? It came true. You're lookin' at it."
"Once you realize what a joke everything is, being The Comedian is the only thing that makes sense."

A veteran "hero" who was vicious even when young, and has since become a full-blown hired gun on government payroll. Dies on the first page, though we only later find out why. 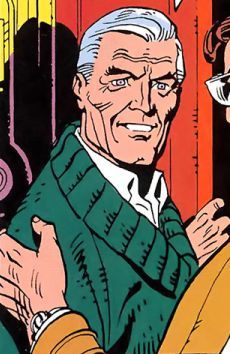 "Y'know, it was a cryin' shame they put you youngsters out to grass in '77. You were a better Nite Owl than I ever was."
"This is the left hook that floored Captain Axis!"

One of the first superheroes to fight crime, and a former police officer, Hollis Mason has since retired, revealed his identity and written an autobiography that provided dramatic insights into the world of superheroes. He has seen the rise and fall of superheroics in the world, and fears for the new generation of costumed crimefighters. 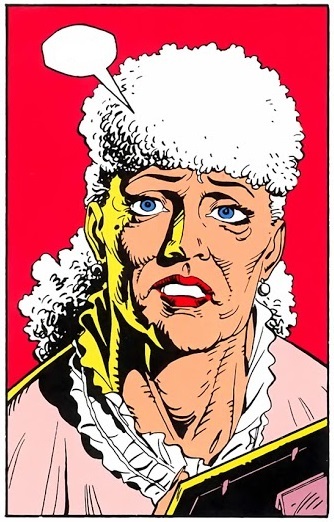 "Laurie, I'm 65. Every day the future looks a little bit darker. But the past, even the grimy parts of it... well, it just keeps on getting brighter all the time."
"Things are tough all over, cupcake. It rains on the just and unjust alike."

A former model who started fighting crime for publicity and became a founding member of the Minutemen, but hasn't been doing much since, except training her daughter to follow in her footsteps. 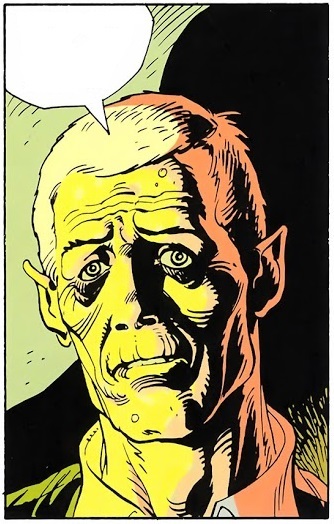 "I did my time. I'm not Moloch anymore. What do you want from me?"
"You know the kind (of cancer) you eventually get better from? That ain't the kind I got."

A supervillain who was active in both the Minutemen and Crimebuster eras. After a lengthy stint in prison, he eventually reformed and retired. 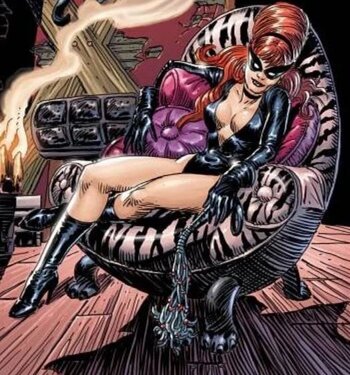 Men Are So Naive

An influential vice queen and bordello owner who operated in the 1960's and a Old Flame lover and later enemy of Nite Owl. 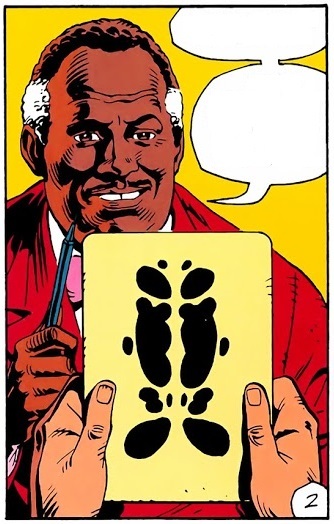 "No problem is out of the reach of a good psychoanalyst."
"We are alone. There is nothing else."

Rorschach's court appointed shrink at Sing-Sing, Dr. Long has a comfortable life and an optimistic belief that his therapy can improve the lives of troubled inmates. Rorschach gets under his skin, however, and he finds himself increasingly obsessed with the patient who's making him question his beliefs. 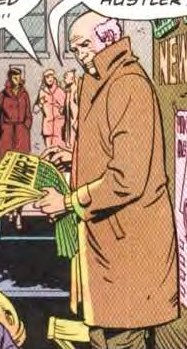 "In this world, you shouldn't rely on help from anybody. In the end, a man stands alone."
"See, everything's connected. A news vendor understands that. He don't retreat from reality."

A news vendor on the streets of New York City. He provides a running commentary on the events of the story. 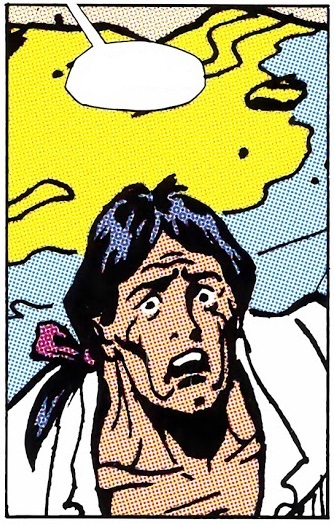 "Exhausted, I slept atop the grave, dreams ringing with the horribly familiar screams of children. I saw the black freighter bearing down on all I loved..."
"Truly, life is hell and Death's rough hand our only deliverance."

A fictional character that stars in the Story Within a Story Marooned that runs throughout Watchmen. The story retells of the man's journey to try to reach his hometown before the infamous Black Freighter gets there first to destroy it. What follows is a story about complete loss of humanity that's not too far from another character in Watchmen... 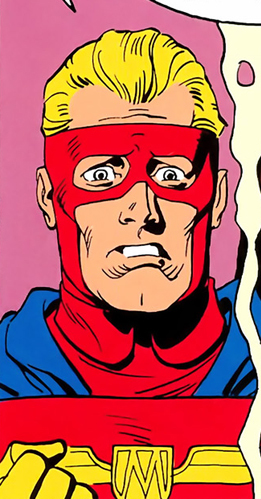 "Specialized law enforcement is standing still. Crime isn't."
"Please! Don't all leave...Somebody has to do it, don't you see? Somebody has to save the world..."

A former Marine who applied his knowledge of military strategy to crime-fighting. A very insecure and nervous person. Remained active until 1974, when he was decapitated in a car crash.

"If he'd designed (his costume) himself, he might have left out that damned stupid cloak and still be alive today."
"Dollar Bill was one of the nicest and most straightforward men I have ever met, and the fact that he died so tragically young is something that still upsets me whenever I think about it."
— Hollis Mason, Under The Hood

A star college athlete from Kansas who was hired by a bank to be their in-house superhero. Died in 1947, when during an attempt to foil a bank robbery, his cape got caught in the door and he was shot. 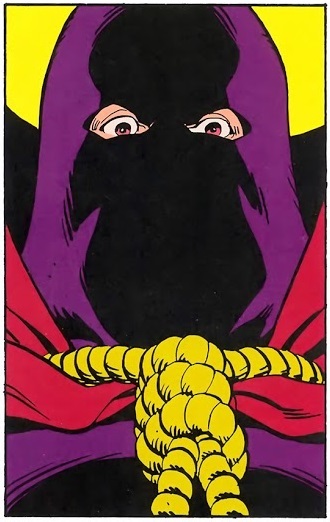 "You sick little bastard, I'm going to break your neck..."
"Frankly, I don't go in for all this razzle-dazzle. I'd rather be on the streets, doing my job."

Possibly the first costumed superhero. Little is known about him, save that he was extremely violent and brutal, and a supporter of The Klan and Nazis. Disappeared in 1955, possibly at the hands of the Comedian. 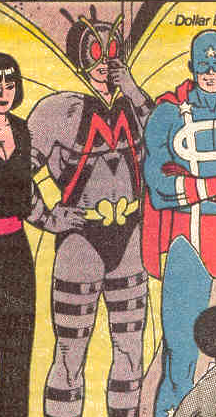 "I think that the pressure he was under at the time prompted the beginnings of the drinking problem that has contributed so much to his later mental ill-health."
"My friends! My friends. What time is it?"

A millionaire playboy who decided to become a superhero both out of a desire to add spice to his life and out of guilt over his privileged lifestyle. Ultimately, his alcoholism (and being hauled before the HUAC) turned him into a shell of his former self, and he was eventually committed to a sanitarium.

"Perhaps the Poles thought so too, eh? You agree, Sally?"
"I mean, she wasn't the only gay person in the Minutemen. Some professions, I don't know, they attract a certain type..."
— Sally Jupiter

A bored Jewish aristocrat who fought crime for thrills. Was exposed as a lesbian and drummed out of the Minutemen in 1946, and killed by an old foe afterward.