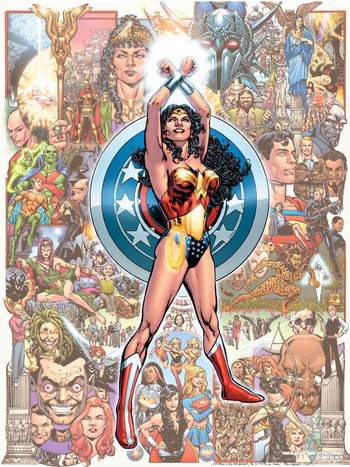 The Wonderful World of Wonder Woman by Phil Jimenez
Advertisement:

This page refers to characters from the Wonder Woman comic book series.

Wonder Woman's Long Runner status along with multiple reboots and other media appearances has produced no shortage of major and minor supporting characters.

This page includes other continuities through various media into the mix.

Remember, this page is for characters and examples from the Main DC Wonder Woman series only. Please do not list characters, or examples from other shows, movies, or alternate universes here. If you have thought of a trope that fits a Wonder Woman from another universe please take that example to its respective page.