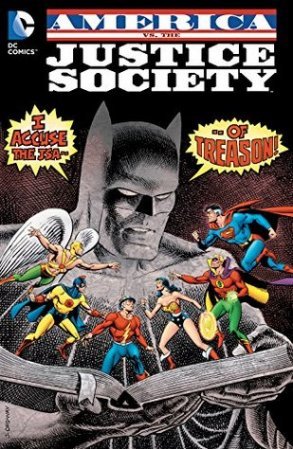 America vs. the Justice Society is a four-issue mini-series published in 1985 by DC Comics. It is written by Roy Thomas, with artwork by Rafael Kayanan, Rich Buckler, and Jerry Ordway, among others. It was considered canon up until Crisis on Infinite Earths, which was released that same year.
Advertisement:

In the story, a secret diary published by the Earth-2 Batman sometime prior to his death accuses his former allies, the Justice Society of America, of being collaborators with the Nazis during World War II. With some help by the younger members of the team, the Justice Society go to court to determine the validity of this "diary" and what purpose it was actually created for.