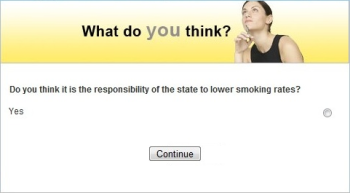 Courtesy of The Daily WTF

Any poll that has been somehow skewed toward a certain result.
Advertisement:

One method is framing the questions to get the answers you want, typically with loaded questions.

Close, but not the same, is where you don't care about the answer, you just are using the questions themselves to sway people: the poll is propaganda or rumormongering masquerading as opinion polling. Example: "Do you believe we should retreat and let the enemy conquer the world? (Yes/No)". Another example: "Would you be more or less likely to vote for Candidate X if you knew he was a convicted murderer?"

Another is polling people when you already know how they will answer, that is, only polling people who might already have the opinion you want. For example, polling only rich people about whether welfare expenditure is too high.

Also there is polling people to identify their opinion personally in order to discover exactly who has what opinion, which is the opposite of legitimate polls where people are only identified by the demographic, not by name.