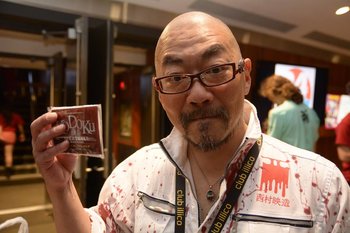 The Master of Gore himself
Yoshihiro Nishimura (born April 1, 1967) is a gore effects artist, writer, and director who has become a cult phenomenon in the B-movie community, particularly for his work in over-the-top Japanese exploitation films (otherwise known as J-sploitation). He's essentially a cross between Salvador Dalí (who served as one of his inspirations), Terry Gilliam, and Takashi Miike.
Advertisement:

Despite working since the 1990's, he didn't truly become noticed until he did effects work for 2005's Meatball Machine, which received praise for its graphic, surreal effects on a low budget. Since then, he's worked on almost every J-sploitation film there is. In 2008, he would release his directoral debut, Tokyo Gore Police, based on his 1995 short film Anatomia Extinction. The film received praise for its impressive gore effects and satire, and has been back and forth between effects work and directing/writing.

Also worth noting that Nishimura's work can get super weird. Here's just a sample

Recurring tropes in Nishimura's filmography include: