Video Game / The Simpsons: Night of the Living Treehouse of Horror 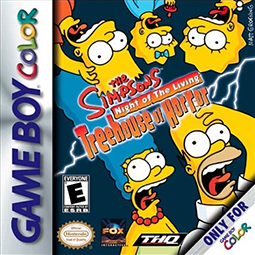 It's Halloween night, and the Simpsons are telling ghost stories in Bart's treehouse. When Homer's pathetic attempt at telling a scary story ends up boring the entire family to sleep, they find themselves having an out of body experience, landing in the world of the Treehouse of Horror, where every day is Halloween. The only way to escape is to get to the top of the tree, which is accomplished by making it through the levels of the game, each one based off of a classic TOH segment.