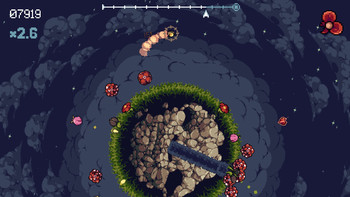 High-flying, weed-killing action!
An astronaut lands on a mysterious planet where it rains seeds that turn into hostile plants. Their only means of defeating these creatures? Jumping on them. Germination is an arcade style "platform-em-up" where you try to survive an onslaught of plants. It is available on Steam and itch.io