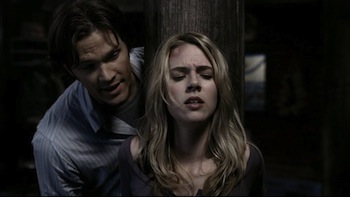 My Daddy shot your Daddy in the head.
Sam, when Dad told me that I might have to kill you, it was only if I couldn't save you. Now, if it's the last thing I do, I'm going to save you.
—Dean

, after having disappeared for a week. Sam claims to have no memory of what he did in that week.

Sam disappears for over a week, and then calls Dean from Twin Lakes, Wisconsin. Dean finds Sam in a motel room with bruised knuckles, covered in someone else's blood, and unable to remember anything that happened. Sam seems overwhelmed by the possibility that he may have surrendered to the fate the Yellow-Eyed Demon has planned for him, but Dean will not accept this and insists they work this like any other case. The investigation leads them to the home of Steve Wandell, a hunter they do not know. The brothers find Wandell's body and security tapes showing Sam murdering Wandell. Sam then insists that Dean kill him so that Sam will not hurt anyone else. When Dean says he would rather die then kill Sam, Sam says, "No. You'll live. You'll live to regret this." Sam then pistol-whips Dean, knocking Dean out.

After Dean wakes up, he is able to track the GPS on Sam's phone to Duluth, Minnesota.

He arrives to find Sam holding a knife to Jo Harvelle's throat. Sam asks Dean to kill him before he kills Jo. Dean lowers his gun and turns away, only to surprise Sam by dousing him in holy water and revealing that Sam is possessed by a demon. Dean chases demon-possessed Sam out on to a dock, where the demon shoots Dean, and Dean falls into Lake Superior. Demon-possessed Sam leaves, believing Dean dead, but Jo hears Dean's ringtone, drags Dean out of the lake, and patches up the gunshot wound.

Bobby realizes that Sam is possessed when he chokes on a beer laced with holy water. Bobby knocks the possessed Sam out and binds him to a chair under a devil's trap. Dean arrives in time to help Bobby try to exorcise the demon, but they are unsuccessful due to a binding brand on Sam's arm. The demon uses an incantation to crack the ceiling and break the devil's trap. The demon then reveals that she is the same demon that possessed Meg and that she crawled her way out of Hell to be able to torture the Winchesters. While she is beating up Dean, Bobby manages to burn the binding brand on Sam's arm with a hot poker, and the demon leaves Sam's body.

Bobby warns them that Steve Wandell's hunter friends are after his killer and gives them anti-possession charms. Dean and Sam set off on the road together.

For this episode = One human, a hunter murdered by Evil!Sam.