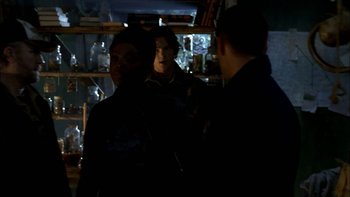 "He didn't make it."
Dean: I feel good for the first time in a long time. I got a year to live, Sam. I'd like to make the most of it, so what do you say we kill some evil sons of bitches and we raise a little Hell, huh?

When the Devil's Gate opened at the end of the previous season, hundreds of demons were released. Sam and Dean team up with a few other hunters to fight off the Seven Deadly Sins.

For this episode = 9 humans and 3 demons.