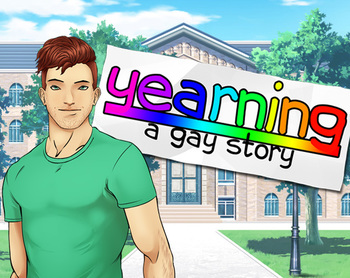 Yearning: A Gay Story, or YAGS for short, is a freeware Visual Novel by Bob Conway

about dealing with the trials and misadventures that come with being a closeted gay man starting his first year of college, including but not limited to: making new friends while keeping in touch with old ones, not flunking exams, trying to come out to one's family and new friends, stomaching the terrible food on campus, and yearning for other men who may or may not be gay.

In YAGS, you guide the player character, a gay man you get to name, through his first semester at college and decide how he spends each day. Does he spend his spare time keeping up with his homework, maintaining a healthy social life, or just plain slacking off? Will his True Companions turn out to be his welcoming roommate Adam and his womanizing frat brother Carlos, his computer science classmates Hannah, Nikhil, and Jake who love board games and memes, or even the members of his college's Queers & Allies club who run the spectrum from stoic actor James to flirtatious lech Dan? And will he eventually find love with a special someone on campus, or end up alone? The choices (and his future) are all up to you.

, with companion fics and paid bonuses also available. The original game censors nudity, but a downloadable patch gives you the option to uncensor it.