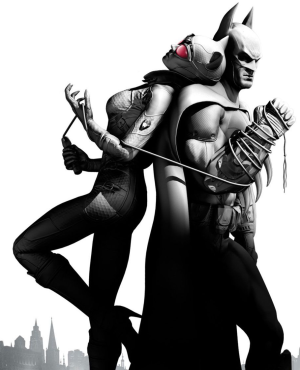 One man's fight is another man's date.
"We conducted our courtship on rooftops and fire escapes. A strange flirtation, a hide and seek, a game of cat and mouse..."
— Catwoman, Whatever Happened to the Caped Crusader?
Advertisement:

When the hero of the show and one of the antagonists have a romantic tone right out in the open, as opposed to Foe Romance Subtext. This adds a degree of tension to the relationship, and as long as you make sure the antagonist is less of a "villain", we're allowed to root for them.

Their different senses of morality will conveniently keep things from progressing too quickly and sometimes they won't move at all, since the character won't be as fun if they go straight. The same concerns about getting rid of the dramatic tension that fuel Will They or Won't They? apply here.

A Sub-Trope of Opposites Attract. Compare Go-Karting with Bowser (when the relationship is platonic rather than romantic or sexual), Loves My Alter Ego (for similar relationships between heroes and bystanders), and Defecting for Love (which happens when the Catwoman decides to go straight after all). Easily overlaps with Villainesses Want Heroes, Trickster Girlfriend, and All Girls Want Bad Boys. May lead to The Masquerade Will Kill Your Dating Life if the pairing is ultimately incompatible or too unstable. The one-sided version of this may be a Villainous Crush. See Foe Romance Subtext for the less explicit version of this, and Fatal Attraction when it's more dangerous. See also Likes Clark Kent, Hates Superman or related tropes, when they have different relationships inside and outside of a Secret Identity. Compare Friendly Enemies.

Has nothing to do with dating a Cat Girl. Usually.

For double points, they had this relationship in the sequel series as well but in reverse; Silverbolt's spark was in one of their foes and Blackarachnia was determined to convert him as he had converted her. To bring Blackarachnia into Transformers: Animated, she became Optimus Prime's Catwoman. That is, once she gets over getting left behind.