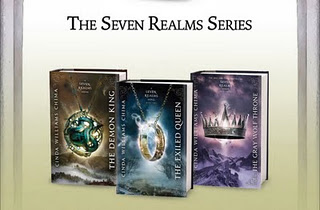 From left to right, books one through three. Book four is not pictured.

A series of novels that take place within the world of, obviously, the Seven Realms. According to legend, a thousand years ago an evil wizard named Alger Waterlow (known to plebs solely as the Demon King) kidnapped Queen Hanalea of the Fells and nearly caused the end of the world. However, Hanalea escaped. She rallied an army made of both wizards and members of the Spirit Clans, who then defeated the Demon King and restored order to the Seven Realms. The Demon King's reign of terror has come to be known as The Breaking.

Fast-forward a thousand years and we have the events of the main series, following (former) street thug Han Alister descended from Alger Waterlow himself and Princess Heir Raisa ana'Marianna, of the Gray Wolf line of queens descended from Hanalea. Although first independent of each other, their worlds collide when a conspiracy emerges around the vastly powerful Bayar House and the Demon King's amulet.

In book one, The Demon King, Han is having trouble breaking away from his former life as a notorious streetlord, when one day he (accidentally) steals a strange amulet from the Bayars. The amulet brings more trouble than it's worth, though, including the undying enmity of the Bayar family and even a dangerous connection with the Demon King of legend. Meanwhile, Raisa is faced with political tension and potential threats to her ascension to the throne of the Fells, on top of her approaching name day and a looming marriage contract.

Book two, The Exiled Queen, follows Han and Raisa as they attempt to escape the political turmoil in their home by attending the world-famous schools at Oden's Ford. Han meets a powerful and mysterious ally named Crow, who comes offering to teach him to use his magic effectively—and aid with his vendetta against the Bayars. Meanwhile, at the same school, Raisa (hiding under a pseudonym) works to take a level in badass. As Raisa and Han eventually meet again, with Raisa still living under a false identity for her safety, a romance, as well as a spiraling rivalry between each of them and the Bayars develops that could threaten both of their lives.

Book three, The Gray Wolf Throne, initially focuses more upon Raisa as she travels back home in order to ascend to the throne. All the while, she's pursued by assassins that wish to prevent this. Han risks his life to help her, but when he has recovered, he finds out to his dismay that the girl he knew and loved as "Rebecca" is actually the princess heir of his country, whom he had sworn to aid as part of his contract with the clan. The two of them are forced into a world of politics and treachery—but this time, with the highest stakes yet.

Book four, The Crimson Crown, was released in October 2012. The plot focuses mainly on the large tension caused by Han's sheer presence in the Fellsian Court, as well as the fact that he's found a powerful object that could possibly unite the Fells once and for all. But can he do so before he's assassinated? Meanwhile, the different forces within the Fells are in perpetual conflict and can only seem to agree on one thing: They want Han Alistar out of the picture. Should Raisa sacrifice the man she loves for the sake of peace or allow the Fells to fall into civil war?

Chima has written a sequel series known as The Shattered Realms, with the first book, Flamecaster released in April 2016.